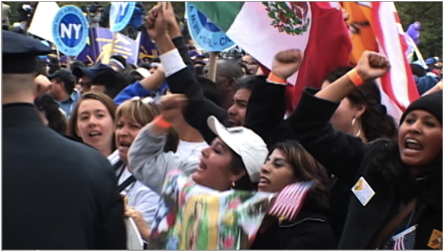 Last July, Pacifica Social Justice hosted a screening of The Long Ride, a documentary film I produced about the Immigrant Rights Movement. About 100 people attended the screening event at the Pacifica Community Center, which was co-sponsored by Pacifica Peace People, Faith in Action, California Nurses Association, Jefferson Elementary Federation of Teachers, AFT 3267 and the San Mateo County Central Labor Council. 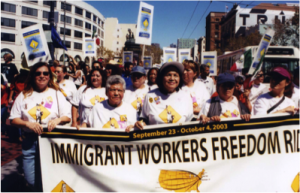 In the 1980s, many of us who are active in the Labor Movement became concerned about the erosion of our workplace rights as many employers engaged in increasingly more aggressive tactics to bust unions and prevent unionization. When workers stood up for their rights, they were often retaliated against with harassment, pay cuts, and firings. 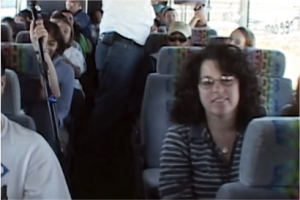 The situation became even more dire with the passage of the Immigration Reform and Control Act of 1986. Although, amnesty was granted to several million undocumented immigrants, employer sanctions also went into effect making it illegal to hire workers without documents. The law that was meant to penalize employers was instead used against workers fighting for better working conditions. Suddenly, there were threats to call the police, immigration raids, deportations and separation of families. 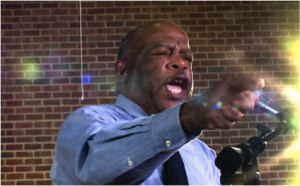 In 2003, immigrant workers, labor unions, immigrant rights advocates, civil rights organizations and faith leaders came together to do something about it. More than 900 immigrants and allies traveled by bus across America to focus public attention on the plight of immigrant workers. Along the way they met with local activists, held press conferences and participated in demonstrations in support of immigrant rights. In Washington, D.C., they called on lawmakers to pass comprehensive immigration reform legislation including a pathway to citizenship, family reunification, stronger workplace rights and civil rights for all. I was one of 106 Riders from Northern California. We were inspired by the 1961 Civil Rights Movement Freedom Riders who risked their lives fighting to end segregation, and we called this massive mobilization the Immigrant Workers Freedom Ride. It was the birth of the new Civil Rights Movement for immigrant workers in the United States.

My role on the Ride was to document our 12-day journey. The Long Ride chronicles the Immigrant Workers Freedom Ride and the on-going fight for immigrant rights to this day. The film puts a human face on this controversial issue and examines the human costs as lawmakers overhaul the U.S. immigration system. The film was released in 2017. 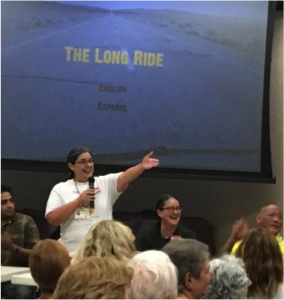 Eleven Immigrant Workers Freedom Riders attended the Pacifica event and participated in a lively Q&A following the screening. It was part of an ongoing effort by Pacifica Social Justice to provide information about how the immigration system is negatively impacting our community and ways to take action to change it.

The immigration issue is often framed as being simply about people living in the U.S. “illegally.” What is so often missed is that faulty immigration laws adversely impact not only people lacking documents, but legal residents and U.S. citizens as well. When there is fear about standing up for your rights at work, it casts a chill on organizing efforts affecting everyone at that workplace as well as every other workplace. Without a voice on the job and union representation, wages are lower; there are less benefits; wage theft is more likely; and health and safety conditions are more dangerous. When an immigrant loses their job or is deported and separated from their family, the impact is felt by family, friends, co-workers and neighbors, regardless of their immigration status.

Since the Pacifica event, The Long Ride screened at the Immigration Film Fest in Washington, D.C. where it won the Best Documentary Award! Additional Fall highlights included: the European premiere at Festival de Cine Político Dirigido Por Mujeres in Madrid; the Utopia Film Festival in Greenbelt, Maryland; Congregation Beth Israel Judea in San Francisco; and the Los Gatos Irish Arts & Writers Festival event Who Belongs: Immigrants, Refugees, Asylum Seekers in the 21st Century. The next screening will be at the Oshman Family Jewish Community Center in Palo Alto, CA January 8 at 1:00pm

As The Long Ride reaches a larger worldwide audience, I am constantly reminded of the importance of the message of the Immigrant Workers Freedom Ride and how it is needed all the more today. We must act with compassion towards new arrivals and fight for reform of the broken immigration system. I continue to be inspired by my fellow Immigrant Workers Freedom Riders every day. As dismal as the current situation is, I am encouraged by the organizing and successes happening around the country.

Valerie Lapin is a filmmaker, and has worked in the Labor Movement, government and on political campaigns. She lives in Pacifica and is an active member of Pacifica Social Justice.