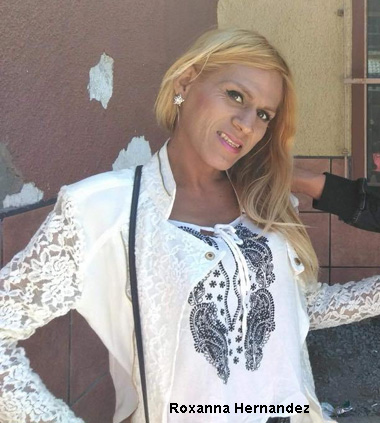 In the summer of 2017 16 people formed the 1st Trans-Gay Migrant Caravan fleeing from Nicaragua, Honduras, Guatemala, El Salvador and Mexico to the US border to ask for political asylum. Four gay men and 12 transgender women arrived in Nogales, AZ on August 10, 2017. Kimberly, a transgender woman from Honduras made this statement at the border rally, “We have fled from our countries of origin because most people do not accept us as trans girls. The mistreatment against us begins in our families, when they run us from our homes. They take us out of our homes because we are trans girls. Many of us have been abused by gang members, even by the security forces. Even the police themselves have mistreated us, raped us, beaten us.

“In our journey for dignity we have suffered tremendously. We do not want to relive this violence by being referred to detention centers for men where we are at high risk of being sexually assaulted.”

Some members of the Trans-Gay Migrant Caravan had sought political asylum in Mexico believing that the Mexican government would offer them shelter and improved living conditions as LGBT people. “We were wrong. Most of us were denied the right to refugee status. Even though a few of us were granted asylum, we found ourselves reliving the experiences of violence and discrimination that we had suffered in Central America. The Mexican authorities have physically and sexually abused us on several occasions. Employees of the National Institute of Migration of Mexico, for example, tortured many of us to have sex with them. “

ICE detention centers are not ever safe places for transgender, lesbian and gay people. According to information obtained under the Freedom of Information Act from the Department of Homeland Security and from complaints of LGBT human rights advocates, it is documented that LGBTQI people in detention centers are 1.5 times more likely to be sexually violated. In retaliation, several facilities deal with sexual assaults on transgender and queer people by placing them in solitary confinement instead of protecting them from the assaults. Several gay men have been put in isolation by prison officials solely for being effeminate.

Organizations supporting the Caravan had worked really hard with local communities to arrange homes where the young immigrants could stay when they crossed the border. Instead they were immediately taken into custody by ICE, put into detention and held for several months. Information is sketchy but as of October, 2017 nine had been released, five were still being held and three had been deported to Honduras and El Salvador.

By May of this year the situation for transgender migrants and most other people had worsened. The lines of those seeking asylum at the border continue to grow longer and longer. People are waiting weeks before they are even seen. There are little to no facilities to house them while they wait. The shelter CARITAS, in Tijuana that at one time during the caravan received 35+ LGBTQI members of the community, was set on fire according to Diversidad Sin Fronteras.

On May 29th Diversidad Sin Fronteras reported the death of Roxana Hernandez while in US detention. Roxy died due to medical negligence by us immigration authorities in the country where she had hoped to start a new life. She died for being a transgender woman, a migrant who was treated neither with respect nor with dignity.

In October Joselin Beyonce, a black trans indigenous woman, a miskita warrior from Nicaragua and a member of the Trans-Gay Migrant Caravan 2017 was granted asylum. Joselin currently resides in New Mexico where she is working on developing a housing project for women released from Cibola detention. She has also directly supported the fight against trans detention by organizing Zumba classes to fundraise money for commissary.

Diversidad sin Fronteras reported on November 3 that 50+ LGBT migrants walked from Matías Romero to Acayucan, Veracruz on a journey characterized by rejection and discrimination not only by locals but by caravaneers too. They hitchhiked for over 90 miles, mostly being rejected by drivers that insulted and laughed at them. Caravan members threw water, water bottles, and peels at them. While many whistled and mocked them, others waved at them shouting good luck.

“The soñadoras of Centro America”, are in need of the following things:

(This article was first published in UltraViolet, June 2018. You can find UV on line at: www.lagai.org)