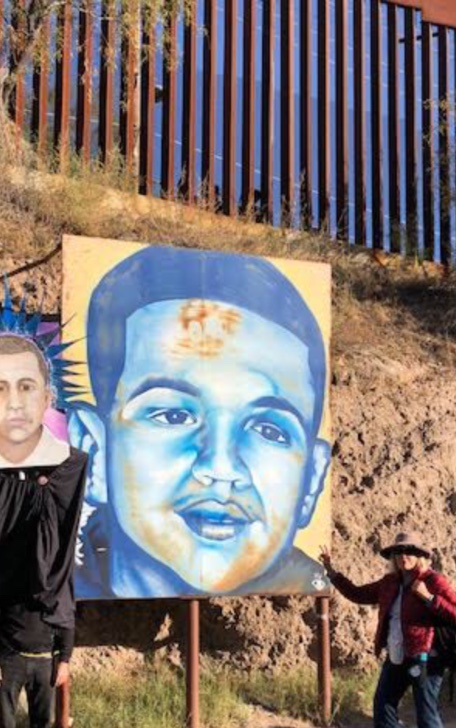 Every year during our Day of the Dead ritual/celebration in my home, my good friend Carolyn says the name of Jose Antonio Elena Rodriguez in our circle of remembrance. We hold him present in our hearts for that moment. The beautiful mural of Jose Antonio who was only 15 when in 2012 he was shot and killed by US Border patrol. They shot him from the US side of the wall; yet, Jose was on the Mexican side of the wall throwing rocks. Last Saturday, I saw that mural and heard the story while attending the annual “SOA Watch” weekend event — this year held at the Nogales Border — the 29th year of this demonstration. Jose’s grandmother was there to share the story of the death of her grandson.

Formerly called the “School of the Americas” our mission was/is to “shut it down.” It is one of the most shameful projects of the US Army. It is a training institute located at Fort Benning, Georgia, where 26 of the “SOA Watch” weekends have taken place. [In 2013, I traveled to Fort Benning, Georgia to bear witness just as I went to Nogales this past weekend.] The institute has been renamed [WHINSEC] to conceal its odious reputation; its purpose remains unconscionable: to recruit police and military personnel from Latin American countries and train them in assassination techniques, the formation of death squads and how to carry out different forms of torture that can be used by military regimes and dictatorships against the citizens of their respective countries. Some of the SOA graduates have gone on to carry out such heinous acts as the murder of Archbishop Oscar Romero [now a canonized saint in the Catholic Church] of El Salvador as well as the rape/murder of 4 churchwomen [including 2 of our Maryknoll Sisters, one of whom I knew personally from the Novitiate] and the 6 Jesuit priests and their housekeeper and daughter. Even more heinous have been the massacres of thousands of poor people in villages in Guatemala, El Salvador, Nicaragua over the last several decades. Massive number of bodies have been found in open graves in these places. 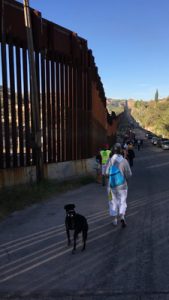 SOA Watch switched to Nogales three years ago because our own Border Patrol agents are now being trained in Fort Benning to carry out terrible atrocities against migrants, desperate to find refuge. Many poor people are trying to enter the US, fleeing from the horrific violence of repressive governments, gang criminals in their countries. They are — just like you and I —  hoping to have a good life. And they come here to the US.

The weekend was full of stories, speakers, music, connections with the thousands of people young and old who arrived in Nogales to participate and to learn. I urge you to check out an amazing documentary when it is released, hopefully in early 2019. “Undeterred” is the title; the filmmaker is Eva Lewis. The movie documents what is happening with the thousands of migrants who try to cross our borders after traversing the Sonoran Desert in Mexico and extending well into Arizona. Members of the small border town of ARIVACA, AZ have been trying to help them when they can. They put out water for the people walking on foot through miles and miles and miles and for days and days without food and water to get here. The movie shows both the strength of people who want a better life, their courage and commitment to sustain the hardships their journeys entail AND the humanitarian people in that little town of ARIVACA! It breaks your heart and warms your heart to watch this movie. We also met several of the people from that town who came for the screening of the film. 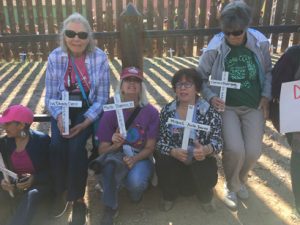 Finally, the most powerful event of the whole weekend was the “litany” on Sunday morning at the wall. You see me in one of the photos bending down holding a white cross with the name Luis Eduardo Sierra on it. The names of many of the people who have been killed as well as the bodies of those who have been found in the Sonoran Desert are called out one by one. And each time, we held up the white crosses and said “Presente” — meaning that we are here to remember and to pay honor to the person whose name was called. The list included those who were killed by “graduates of SOA” in their home countries as well as those who died making their arduous journeys to find refuge here. When I heard Ita Ford’s name called out, I was overwhelmed with emotion. Ita was the Maryknoll Sister I knew. I wept for everyone. These were not peaceful deaths, nor necessary.

I can give you so much more information but for now, I will sign off. Please let me hear from you and let me know what else you would want to know.